Five Plants You Think Are Native But Aren’t

Because native plants have a long co-evolutionary history with the native wildlife of a location, they are uniquely well-suited choices for the modern garden. In this age of climate-change and habitat destruction, our gardens should do more than just look good: they must do good as well.

Whether that means providing food and shelter for wildlife or reducing stormwater pollution, native plants are great plants.

But human memory is short, and people sometimes equate prevalence with history. Yet many plants that Americans think of as native here are actually introduced from Europe, Asia, or Africa.

Here are five plants that people often think are native that aren’t.

We’ve also included a few suggestions of native plants you can use in their stead.

1. Crepe myrtle (Lagerstroemia) is a group of plants introduced to America from China and Korea in the 1790s by a French botanist. These colorful small trees are so common in southern states that they are often assumed to be native. While crepe myrtle offers colorful summer blooms, the plant produces no nectar and is a host plant for only three kinds of caterpillars. A good native alternative? Try smooth sumac (Rhus glabra), a native shrub with red berry clusters on female plants.

3. Another non-native with good marketing is Kentucky bluegrass (Poa pratensis). This turf grass has no direct native equivalent, but for places where an old-fashioned lawns is simply not needed a meadow that includes shorter native grasses might be just the ticket. One of our favorite native grasses is little bluestem (Schizachyrium scoparium), which is both a stunningly gorgeous plant in fall and also a host to several native butterflies and moths.

4. Queen Anne’s lace (Daucus carota) is so common along roadsides and in old fields that it seems totally at home here, but it doesn’t belong. Instead of planting this in your garden, we suggest a white-flowered boneset or thoroughwort instead. These are better choices for pollinators, and supports dozens of species of lepidoptera. 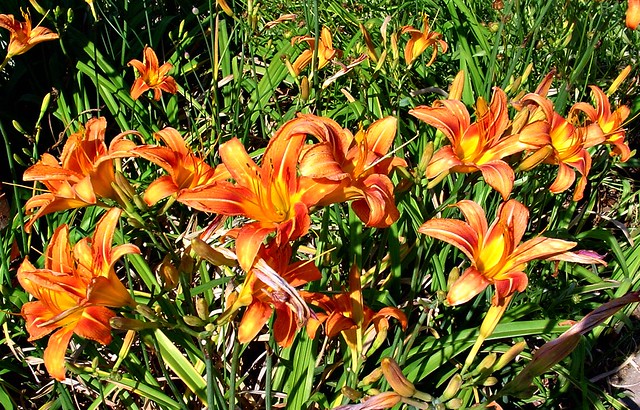 5. Daylillies, especially the orange Asian species Hemerocallis fulva, are so popular that it is hard be believe that they don’t belong here. But they don’t. In fact they aren’t even true lilies. Worse, these are listed by the U.S. Fish and Wildlife Service as one of the “Plant Invaders of Mid-Atlantic Natural Areas”. Remove these if you have them and replace with Rudbeckia triloba or Heliopsis helianthoides.

Don’t be fooled by a plant just because it is common. It is easy to look up any species of plant in the USDA Plants database to see if it is native or introduced.